Where You Can Dine on Celebrated Chefs' Cuisine at Sea - And It's Included!

There’s a constellation of Michelin stars and celebrity chefs bringing their award-winning dishes, TV show hits and cookbook favorites to guests on cruise ships in all the seven seas.
Dare we say it?Sometimes, the culinary experience afloat is even better than on land, where you may line up around the block or try to book a table in a decorated chef’s restaurant months in advance.And you might need those extra months to save up for the gastronomic indulgence.
Cruise guests don’t just have easy access, with chef partnerships making their signature culinary stylings available to all the guests on board.The token fees charged for cruise line specialty restaurants by superstar chefs are a fraction of what you’d pay at any of their restaurants on land.
And in some very special cases, at the luxury level of cruising, whether a chef has consulted on an entire ship’s cuisine, or master-minded a single specialty restaurant, these stellar culinary experiences are included in your cruise!
Lynn Elmhirst, Producer/ Host and Cruise Expert of BestTrip TV, shares her favorite, surcharge-free gastronomic experiences at sea.

The American chef with the most Michelin stars and a string of renowned restaurants including Napa’s The French Laundry and NYC’s Per Se, created The Grill by Thomas Keller for ultra-luxury Seabourn ships.
You’ll delight in elevated classic and mid-century steakhouse atmosphere and dishes, some you don’t see often any more, like Lobster Thermidor, and Caesar salad prepared tableside, accompanied by choice selections of wines and crafted cocktails.
WATCH VIDEO ABOVE FOR A TASTE OF THE GRILL BY THOMAS KELLER ON SEABOURN
Keller also presents popular, family-style set menus some evenings in the casual Colonnade. What’s more, there’s no additional cost for Keller cuisine on Seabourn.

Japanese meets Peruvian cuisine in the kitchens of Japanese celebrity chef Nobu Matsuhisa, who has a host of acclaimed restaurants in major gastronomic cities around the world… and on the two exquisite Crystal ocean cruising ships. 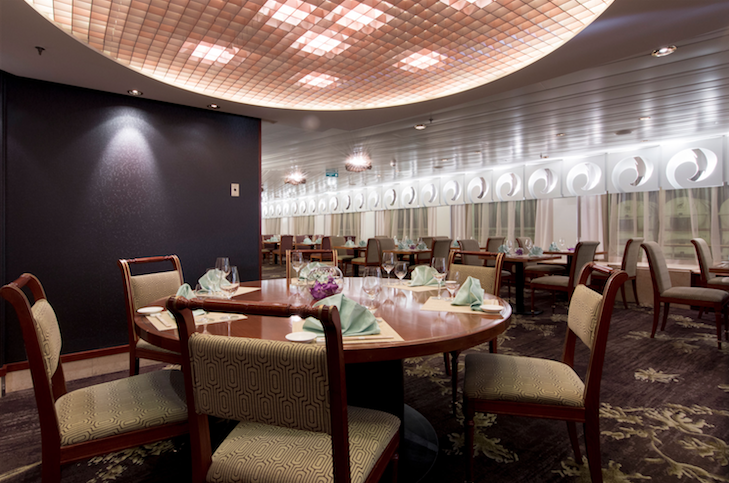 (Photo: Crystal Cruises)
Umi Uma & The Sushi Bar serve the only Nobu cuisine at sea, and they are included in your cruise fare once each for every week-long cruise.Delectable sushi and sashimi are offered, along with fusion dishes like Nobu-style Lobster with Truffle-Yuzu sauce, or a bento box of chocolate souffle cake with shiso syrup and sesame ice cream.

He’s been with Oceania since its first ship sailed, and shaped the culinary signature of what Oceania bills as ‘the finest cuisine at sea’.The French Legion of Honor member, whose resume includes a long-running, beloved PBS TV series, cookbooks and time spent as the personal chef of multiple French presidents including Charles de Gaulle, brings his mastery of exhalted French cuisine to the Oceania fleet, where all dining, including specialty restaurants, is complimentary. 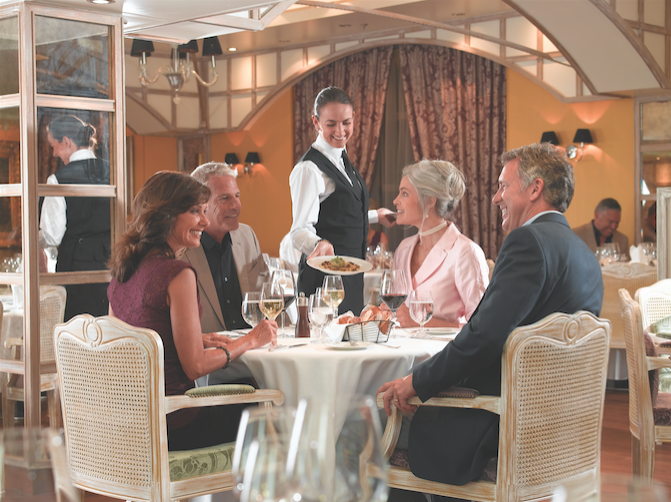 (Photo: Oceania)
In addition, on the Marina and Riviera, the restaurant Jacques re-creates an authentic, relaxed Parisian bistro dinner experience. Decorated with heirloom antiques and art from the chef’s personal collection, it’s an escape to the streets of Paris, with rotisserie turning fragrant roasts and seafood is served in classic French style.

Frenchluxury cruise line Ponant turned to another French culinary legend to ensure the excellence of the cuisine and a ‘French touch’ on its fleet of small jewels of ships. Alain Ducasse remains one of the most decorated chefs ever, with restaurants in Europe and the Americas making him the first chef to have 3 restaurants awarded 3 Michelin stars at the same time. 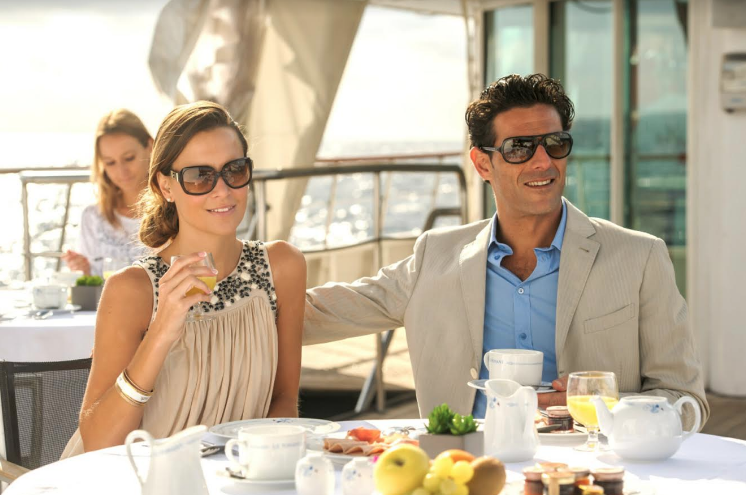 (Photo: Ponant)
On Ponant’s intimate ships, dining takes place in one or two restaurants (some Ponant ships have both a ‘Gastronomic’ restaurant and an casual, al fresco style Grill). Ducasse ensures the French focus on cuisine thrives on Ponant ships with refined dishes that speak to the shared French heritage, as well as dining inspired by local ports of call. 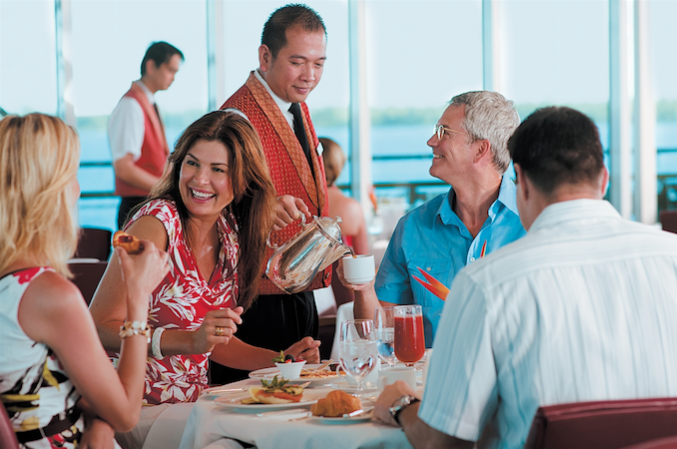 (Photo: Paul Gauguin)
The ship Paul Gauguin epitomizes French Polynesia, famous for sailing exclusively in the South Seas. The ship’s namesake French artist, the French Polynesian itineraries… and a French chef raised in the French countryside and rising to the level of having his own, Michelin-starred restaurant on Paris’ Champs-Elysees. 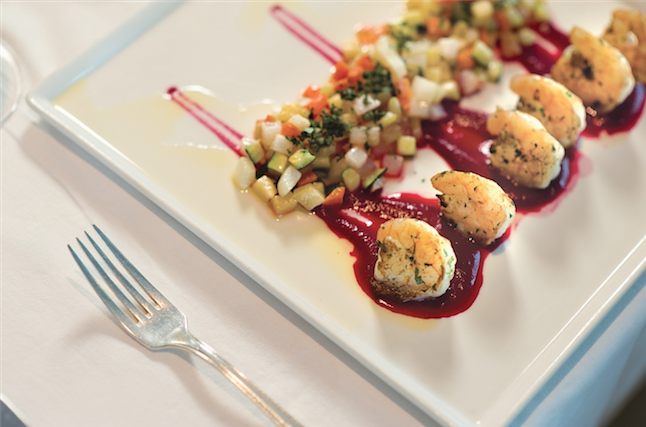 (Photo: Paul Gauguin)
In addition to L’Etoile,the ship’s main, fine dining room,and Le Grill, alfresco casual dining, the Paul Gauguin has a third dining venue, and all are included in your cruise fare.La Veranda, the third venue, is transformed in the evenings into a gourmet restaurant serving Vigato’s gourmet cuisine.

Rather than partnering with a single - or multiple individual chefs, Windstar has partnered with America's most beloved and prestigious culinary institution, the James Beard Foundation. Windstar has formalized its relationship as the Official Cruise Line of the foundation, whose annual awards are referred to as the Oscars of America's culinary scene. 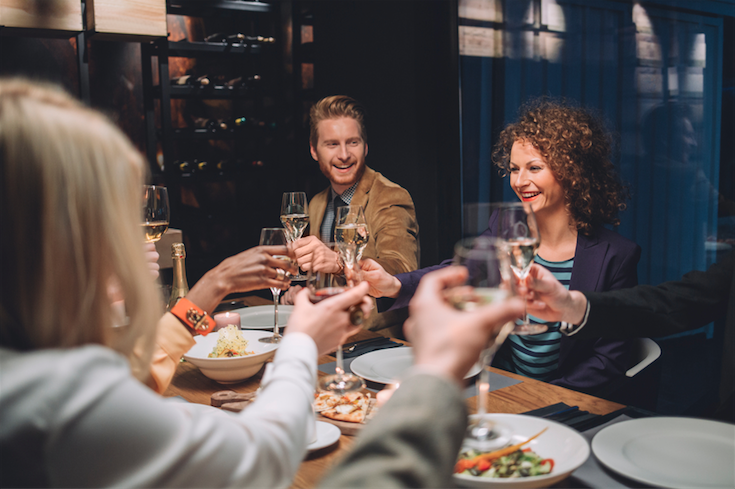 (Photo: Windstar Cruises)
Together, they bring some of the country's most talented chefs and sommeliers on themed Windstar cruises, where they shape the onboard dining program. Imagine dining on dishes created by not just one celebrity chef, but a list of all-stars with the likes of Maxime Bilet (The Cooking Lab),Evan Hanzcor (Egg), and Jose Mendin (Pubbelly Noodle Bar, Habitat, Baja Bao). Windstar's themed cruises featuring James Beard Foundation chefs and beverage experts are a foodie’s dream, with chef demos, special beverage pairings, and market tours.
From classic or modern or destination-inspired French cuisine, to elegant Japanese andcreative fusion, to elevated cuisine from across America.
Of the countless reasons to treat yourself to a luxury cruise, one of the best must be the gastronomic delights by some of the world’s most acclaimed chefs - that are already included features of your cruise.

Copyright BestTrip.TV/Influence Entertainment Group Inc or Rights Holder. All rights reserved. You are welcome to share this material from this page, but it may not be published, broadcast, rewritten or redistributed.